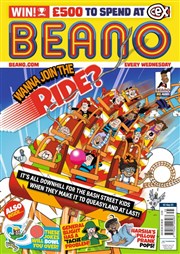 Beano is the world’s longest-running weekly comic. We’ve been entertaining kids of all ages since the 30th of July, 1938. More than 80 years later, our unforgettable characters remain as popular as ever. Dennis STILL menaces, Minnie STILL minxes and Roger STILL dodges. That’s why everyone we know STILL loves Beano.

Every Wednesday we deliver laughs with our classic combination of comics and fun features. Aimed at kids aged 7-11, our readers are cheeky, mischievous, energetic and fun-loving – much like Dennis himself.

PPA’s Children’s Magazine of the Year 2021, Beano is the perfect way to encourage and improve reading in reluctant readers. Our use of visual storytelling helps introduce young Menaces to new vocabulary and develop key reading skills every week.

The Beano Annual continues to be a firm fan favourite too, securing #1 spot as bestselling annual in the UK for 11 out of the past 13 years. Our Emmy-nominated animation series, Dennis & Gnasher: Unleashed!, has been sold to over 90 countries, including the BBC and Netflix, and has been viewed by over 200 million people.

Inspired by the comic, Beano’s award-winning digital entertainment network, Beano.com, reaches over a million British and American kids a month, providing content that kids love – and come back to. Made available for free across web, iOS and Android apps as well as on YouTube and PopJam, the platform is a one-stop destination where kids can let their imagination run riot.

Enter your postcode below (with a space) and click "Find" to search for your local stockist.