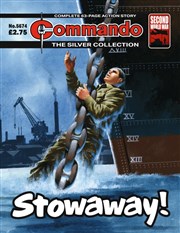 What is a Commando?

Physically it’s a fortnightly complete 63-page story of around 135 black-and-white illustrated frames with text in panels and balloons to provide the narrative.

This is wrapped in a full-colour cover that folds around the back of the book where you can find our trademark dagger and the back cover write-up.

Between the covers lies the story. These are always fiction however, they are set against an authentic background based in solid fact.

But a Commando is more than just paper and ink. It’s the story of a struggle against adversity, a tale of action and adventure that can be set against the background of the Roman invasion of Britain or the battlefields of Nazi-occupied Europe or, sometimes, the imagined battleground of the future.

Where does an individual Commando come from?

Every Commando starts with an idea. These can be prompted by almost anything — perhaps seeing a piece of military equipment, reading the tale of an actual event, or an imagined piece of dialogue. There’s no formula.

From the idea, the writer has to build his story into a plot with a beginning a middle and an end. And characters. Commando revolves around characters. Square pegs in round holes, the fearful, the daring, the compassionate, the cruel. All must overcome or be overcome.

This completed script is given form by the artist. He gives faces to fighting men, gives them guns and uniforms, gives them life. And, where the script demands, he may bring death to them too.

Once he has done his bit, the words and pictures finally meet up on the finished page.

Enter your postcode below (with a space) and click "Find" to search for your local stockist.